How to Set Up RAID on an ASUS Motherboard 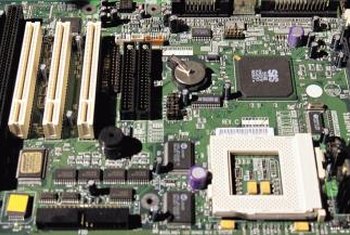 Businesses can set up a redundant array of independent disks, or RAID, configuration to duplicate data on a device, protect against data failure or improve write performance on a volume. Some ASUS motherboards include software built in to the motherboard that enables administrators to set up a RAID configuration on the PC. Some RAID-enabled boards feature Intel Matrix Storage Manager, while others use MegaRAID.

Power on or restart the ASUS PC. Press "Ctrl-I" on the boot screen.

Press "1" to select "Create RAID Volume" and then press "Enter."

Create a name for the new RAID configuration and then press "Enter."

Choose a disk to add to the configuration and then press the space bar.

Repeat the above step to add additional disks and then press "Enter."

Use the directional pad to select a stripe size, if applicable, or use the default size. Press "Enter."

Enter the desired size for the RAID configuration, or use the default maximum size. Press "Enter." Press "Enter" again.

Press "Y" and then press "Enter" to create the RAID volume.

Restart or turn on the computer and then press "Ctrl-H" on the boot screen.

Select "Custom Configuration" and then click "Next." Hold down "Ctrl" and then select a drive from the left pane to add to the configuration.

Select a stripe size for the configuration, if applicable, or use the default value.

Select "Enable" or "Disable" from the Span drop-down menu to turn spanning on or off. Spanning enables a drive to occupy space in multiple RAID configurations.

Enter the preferred size of the configuration in MB, or use the default value. Click "Accept," then "Next."

Ruri Ranbe has been working as a writer since 2008. She received an A.A. in English literature from Valencia College and is completing a B.S. in computer science at the University of Central Florida. Ranbe also has more than six years of professional information-technology experience, specializing in computer architecture, operating systems, networking, server administration, virtualization and Web design.

"RAID1 doesn't really protect against data loss"
"It is for uninterrupted uptime, not data protection"

Interesting.
What if one of the two drives in RAID 1 fails (mechanical, or electrical reasons - dead)?
Is data protected, or not?

That is basically the only thing RAID 1 does, protect against a physical drive fail.
All data is mirrored across both drives. If one fails, the system can limp along until you get the opportunity to replace the drive and rebuild the array.

It does NOT protect against all the other forms of data loss.
Accidental deletion, ransomware, other malware, "oops, I formatted the wrong drive", etc.
We see that here every day.
Physical drive fail is by far not the most common form of data loss.

The user and the OS simply sees one volume, one set of files.
The RAID 1 is good if you are running a webstore, and actually need 24/7 ops. Downtime = lost sales.
But any business that runs a RAID 1 also has a good backup routine.
And if you have a good backup and do not NEED 24/7 ops...you don't need the RAID 1. Your data is protected with the backup.

Last year I had a drive fail, and my backup routine let me recover the entirety of the contents, exactly as it was at 4AM that morning when it ran its nightly backup.

While this routine may seem complex and over the top, it could easily be reduced down to a single external drive.

What is your backup situation at home? And if you don't do that, why not? Every single day, I read multiple threads here of "How do I get my stuff back?" or "That drive had 5 years of photos of my kids!!" Be it a dead drive, dropped phone, virus, accidental deletion, formatting the wrong...

Z370 and Z390 Intel chipsets was released back in 2017 and 2018 years and they still are mainstream now. There are many motherboards based on Z370 and Z390 chipsets containing 2 or more M.2 sockets. Those motherboards might accommodate NVMe SSD storages with RAID 0 or 1 built on Intel® Rapid Storage Technology.

The performnce of NVMe SSDs can be observed in NVMe RAID Performance on Z390 Chipset Motherboard article.

Those two motherboards and NVMe SSDs work unstable in bootable RAID 1 configuration. It seems the chipsets are not aimed to be used in that role. After installing Windows 10 on RAID 1, both motherboards are constantly doing two steps: rebuilding RAID and crashing Windows. 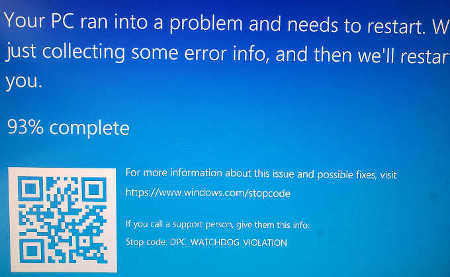 There are 2 ways to fix it. The first way is to use ASUS HYPER M.2 X16 CARD V2 adapter. It is only applicable to ASUS motherboard as ASRock motherboard is lack of bifurcation. The second way is to make your motherboard cooler running CPU and motherboard fans on 80% or more of their capacity. Also, it can be used non-bootable RAID.

Intel 660P NVMe is only supported by ASUS HYPER M.2 X16 CARD V2 adapter as the adapter accepts Intel NVMe SSDs for Z370 and Z390 chipsets. WD Blue SN550 is recognized but RAID can't be built and it works unstable as well.

After the RAID setup completed, Windows 10 can be installed. Windows 10 does not request any additional drivers as BIOS handles everything transparently.

The easiest way to set up Raid is EZ Tuning Wizard. It takes care of all settings.

After the RAID setup completed, Windows 10 can be installed. Windows 10 does not request any additional drivers as BIOS handles everything transparently.

After the RAID setup completed, Windows 10 can be installed. Windows 10 requests drivers and they can downloaded from the motherboard support page and located in SATA section. Extract drivers and write to USB with Windows 10 installation.

install identical drives of the same model and capacity when creating a disk array.

To install the SATA hard disks for a RAID configuration:

Install the SATA hard disks into the drive bays.

Connect a SATA power cable to the power connector on each drive.

ICH7R Southbridge chip. To do this:

Go to the Main.Menu, select IDE Configuration, then press <Enter>.

Set the ATA/IDE Configuration item to [Enhanced Mode], then press

Set the Configure SATA As item to [RAID].

Set the Onboard.SATA.RAID.ROM item to [Enabled]. Otherwise, the RAID

Save your changes, then exit the BIOS Setup.

Depending on the RAID_SEL1 jumper setting and the operating system, you can

select a utility to create a RAID set. Refer to section 4.2 Jumpers for details on the

Use the LSI.Logic.Embedded.SATA.RAID.Setup.Utility to create a RAID 0, RAID

Use the Intel SATA ports - don't use the ASMedia ports and disable then in the BIOS.

If you are using an M.2 SSD in SATA mode, don't use the first two Intel SATA ports for any SATA devices as those ports will be disabled.

So maybe plug your drives into the Intel express SATA ports.  Set SATA type to RAID and not AHCI.

In the BIOS, you may need to enable CSM, or maybe just set it to auto.

Go into RAID configuration menu in BIOS and create RAID array with your two drives.

Go into boot options and set boot order with SSD drive as the first item in the list.

If you've done all this already, can you use boot override (in BIOS) to boot off of SSD?

Another thing you do to check if the drives are configured correctly for booting is to boot off if the installation media to a console and then run diskpart.  Sometimes the correct partition isn't marked as active.  You can also run bootrec to fix any boot related issues.

identical drives of the same model and capacity when creating a disk array.

To install the SATA hard disks for a RAID configuration:

Install the SATA hard disks into the drive bays.

Connect a SATA power cable to the power connector on each drive.

Setting up RAID from RAIDXpert2 Configuration
Utility in UEFI BIOS

Go to the Advanced menu > SATA Configuration, then press <Enter>.

set the item to [Disabled].

Refer to Chapter 3 for details on entering and navigating through the BIOS Setup.

Due to chipset limitation, when SATA ports are set to RAID mode, all SATA ports run at