Confused about which Clash Royale Creator Codes to use and which creators to support today? Don’t worry, you’ve come to just the right place!

You could be an ambitious player looking to improve at Clash Royale by watching some videos. You could also be someone new to the game looking for tips on how to play it better. No? Then instead, maybe you’re just looking for a bit of fun Clash Royale content? Whichever of the three you are, by the end of this article, you’ll have what you’re looking for.

But first, for those of us who do not know…

What are Clash Royale Creator Codes?

Creator Codes in Clash Royale are short character codes that you enter in order to support your favourite content creator in the game. In order to do so, head on over to the left-most tab in the game. This is the shop section. Then, scroll to the very bottom and voila! There you have it, the place where you enter the code.

Why should you use Clash Royale Creator Codes?

Your use of Clash Royale Creator Codes helps support certain creators in the game. So, how does this happen? Well, a part of the proceeds from your in-game purchases goes to the creator you support! This is a major financial aid and helps them grow. Moreover, it helps ensure a deeper bonding between the creators and players within the community.

Also, just about anybody can apply for a creator code. Even you! No restrictions!

For a detailed guide on how you can be the next big content creator for Supercell, click here.

Now, let’s get to the business end of the things. For your comfort, we’ll divide the type of content into 3 groups. This way, you can figure out what type of content to watch, by yourself.

First of all, we have pure and professional gameplay content. For this category, our first pick is CWA: Clash Royale (code: cwa). This is one of the game’s oldest and most famous channels. It is hosted by Tim Evans aka Ash. He uploads videos featuring the best in action, daily, along with deck tips. However, though a great creator, CWA is no pro. So, if you want content straight from the pros themselves, look no further than Morten Royale (code: morten) and Boss Cr (code: boss). Both of these guys are players of very high skill and calibre.

Next in line, we have the category of fun and meme content. The very best in this genre at present, with no room for doubt, is B-rad (code: brad). A former professional from Canada, his videos are full of humour and some great gameplay. Next up, we have another Canadian, Orange Juice (code: oj). OJ, like Ash, is another very popular creator. His videos are not just funny but extremely informative and technical.

Finally, we come to the third group which is for good content in general. Legendaray (code: legendaray), Sir Tag CR (code: sirtag), Clash with Shane (code: shane) and Nyte Owl (code: owl)are some other really good creators in this bracket. Though not as famous as the ones above, they are still very helpful and watching them is certainly worth it.

In case you’re feeling nostalgic, you can check also out Molt (code: molt) and Nickatnyte (code: nyte) for content from the early years of the game. 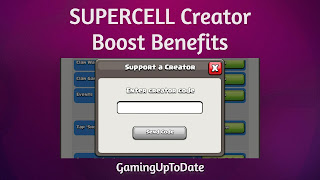 Creator Boost is a program initiated by Supercell to support its creators (on YouTube and Twitch) by providing them a unique code that can be used by the players (worldwide) in-game. Using that particular code, for every monetary transaction, a player or a user makes inside of the games developed by Supercell, the creators are rewarded a few percentages of the total transaction made during that period. Such creator codes can be entered inside the games in the Creator Boostsection. The duration of each creator code is around 1 week. The entered code gets reset after one week's time. And, the user has to re-enter the code to benefit their favorite content creator. Anyone, of course, a content creator focused to create the content of the Supercell published games, either on any of the two platforms: YouTube and Twitch, having a following of more than 5,000 people can apply for their own creator codes if accepted by Supercell.

But, they would not have achieved so much engagement if none of the content creators created educational, exciting, and interesting videos of this game. Since its beginning, creators around the world have been working days and nights to find unique ideas, best decks, and strategies to help you win each match in this game.

Have you noticed?  Those creators also have a decent following either on YouTube or on Twitch. Some of them have over a million subscribers, as well. On the other hand, there are also some creators who have been working hard but sadly, their content has not reached many individuals. What's common in between those creators is a strong and devoted fan base.

Clash Royale is a game created, owned, and published by Supercell. Creator Boost, an initiation of Supercell to benefit its creators was started in October 2019. Three months earlier in July 2019, Pass Royale, a brand new feature was added to Clash Royale. Thanks to it, Clash Royale increased its revenue beyond $2.5 billion that year. (Source: Forbes)

Maybe because their revenue grew unexpectedly that year, they decided to add Creator Codes in Clash Royale. Though they would be sharing some percentage of their revenue to their creators, it surely would increase the number of content creators dedicating to creating content for this game. This would definitely invite more people to play and enjoy the game which in turn, is an indirect advertisement of the game through its content creators.

In clash royale, each creator has to sign up for the creator boost program through Supercell Creators website. One can only apply for the program if they have met the eligibility criteria. The unique code referred to as "Creator Code" is decided by the creator themselves, and not by Supercell. Once accepted, creators can ask their audience to use the code in the Creator Boost section while performing any transactions in the game.

To sum up, creator codes in clash royale is a part of the Creator Boost program that benefits the creators, increases in-game transactions, increases Supercell's revenue, and increases the audience's love for this game.

For every purchase you make inside the game, the creator you are supporting gets some amount of the money you just used. This motivates creators to make more content and entertain everyone around the globe. SUPERCELL is trying to reward its creators for their contribution in growing the game for almost 4 years now. This can be done if every one of the audience supports them.

Now, why should you support a creator?

If you never like spending money inside the game, creator code is not made for you. But, if you love spending money and buying those Royal Pass and unlocking missions, you must think about it.

How to apply for your own creator code?

Link: This article will give you an overview of applying for the creator codes.

What items can be bought inside the game?

If by some means, you are new to this game. You can buy gems, gold, royal pass, and chests in the game by spending real money. Gold can be bought to upgrade the cards. Chests can be bought for amazing experiences because they create a suspense whether which card is going to pop up from the chest. Royal Pass provides you free tower skins, emotes, unlimited entries to challenges and lots of chests rewards. Gems provide you almost everything inside the game. You can open the chests, emotes, buy golds, enter challenges and many more using the gems inside the game because you don't get them in abundant amount.

So, these were some of the creators who put their sweat and tears off to create content for you. If you might be wondering, one of the GOD creator is missing from this list and yes, its ClashwithAsh (CWA) Mobile Gaming, I tried to search for his creator code but sadly couldn't find it for Clash Royale. If any one of you know his creator code, do comment down in the comment section.

Have a nice time spending money inside the game and don't forget to support your favorite creators around the globe. Peace.....

Supercell has a support program for the content creators of its games (Clash Royale, Clash of Clans & Brawl Star) and we provide you with a list of all the codes of all its associated content creators.

Creator codes work in any game. So regardless of whether you buy gems in Clash of Clans, Clash Royale or Brawl Stars, you can support the following content creators from youtube, twitch and twitter, whether they make content of the game that you are going to buy gems for or not.

Supercell Creator Codes – How to use them?

This is where the difference comes, because depending on the game you access its creator codes program in one way or another. So follow the link of the game that interests you

Sours: https://www.mejoress.com/en/supercell-creator-codes-full-list/
how I got 24,000 gems for FREE in Clash Royale...